Background:  During the era of Buddhism, when Lord  Buddha was still alive had pilgrimaged to localities in order to declare Dharma sermon to preach the teachings to teachable persons. In his journey, Pra Indra and the Diving Being followed him. After coming to Doi Chom Thong and Doi Noi (now in Chom Thong district, Chiang Mai province), he came to the habitat in the livelihood of the farming area of Lua people, the Buddha had predicted that here, In the future, this area will be a new city, prosperous in Buddhism called Hariphunchai Nakorn at the area where he stayed. While, there was a Lua named Mengka But which was engrossing in his farming and caught a glimpst of the Buddha's presence, it was the fear that arose and ran away. But when Lua Mengka But noted that he is Lord Buddha, who came to preach teachable persons.  Mengka But, so returned to the same place when Mengka Son returned, people in the nearby area have heard about the coming of Lord Buddha, therefore they  persuade each other to come and listen to the truth. When the Lord Buddha performed the dharma and purification of the mind of Mengka But and people who listen as appropriate, the Buddha has shown the virtue of the construction of the Buddha image until everyone’s faith occurred. When the Buddha’s showing of virtue ends, Phra Indra who was the chairman of that place, respectfully requested Buddha's hair relics to be enshrined in order to be a respect for the future generations in the future. When Phra Indra had a desire for that, Lord Buddha was not contrary and gave the hair relics.

people had joined with Mengka But and wealthy millionaires who lived in that area, dug a tunnel and made large brick building. Later, put the Buddha's hair relics into the glass casket and put gold spoons, mixed gold, silver spoon into the silver cinerary urn kept in tunnels laid with silver, mixed gold and gold stored in three directions. At the same time millionaires and people in that area also brought various valuables and put them into the tunnels to honor Buddha. By then they helped shut the mouth of tunnel with the gold and silver plate and finally the large stone to prevent the destruction and theft. Later, Phrayanak (the serpent) came and see the tunnel containing Buddha's hair relics and fearing that will be harmed, therefore it went down to the groundfloor and then remove the large stone to close the mouth of the tunnel once more.

The Mother Chamdhevi granted her first son, Chao Mahantayos (The ruler of Haripunchai, as her successor) to invite the Buddha’s hair relics into the cave that was built and granted Chao Anantayot. (The Creator of the Kelang City) was the one who invited offering: Glass, gold, silver ring, silver flower, golden flowers, golden elephant, horse, cattle statues, by the size of a man’s fist golden and silver and gold trays, by the total number of one wheel. When everything is done, the Mother Chamdhevi, Phra Chao Mahantayos and  Anantayot have the consensus that it was desirable to create a Buddha image at the mouth of the cave to be a sign and for people to worship for their prosperity and heritage of Buddhism.

The large Buddha statue, sitting cross-legged, 13 cubits wide, 18 cubits high, was constructed covering the tunnel that contained the buddha’s hair relics (such tunnel is now under the Buddha image). Initially, from the beginning of construction until it reached the neck,  the construction team also had the same opinions, But when it reached the face of image, they had different opinions on what types of image that was different. There was conflict and no technicians to do because the face was something that was difficult enough. These different opinions had gone into the way of Phra Indra's foreknowledge, Phra Indra saw that it would not be good, so came to the world by transforming himself into a  man called "Chipakhao ( white Ascetic)" walked into that group of people while they still did not know from where he came. When he arrived in the site of the construction, he volunteered to construct the face of this Buddha image. So when they all agreed, the White Ascetic himself bagan to make the face and when he finished the face of image appeared as a Buddha image with a beautiful face but still lacking the glasses in the eyes that would be contained into the eyes of the newly created Buddha image. The White Ascetic volunteered to find glasses to put in the eyes. The next day he brought 2 green emerald solids (They were the emerald glasses from Phra Indra’s land) to put in the eyes of the Buddha image. When putting them in the eyes, the Buddha image looks fresh and beautiful, created a great many surprise to those who had seen. And they built tunnel covering Buddha image once more.

Because of this, people in this area had dubbed the name of the Buddha image in ordinary and native language that "Phra Chao Ta Khiew (Green Eyes God)" or called as a royal "Phra Putta Patima Phra Net Khiew (The Lord Buddha statue, Green Eyes)". The construction of this Buddha statue was begun in the 8th day of waxing moon, 1235 B.E. and completed in the 5th day of waning moon 1235 B.E.  And when the Buddha image was finished containing the eyes, they agreed to make merit to celebrate the Buddha image by the invitation of sacred Phra Thera (his highness senior monks) to conduct prosperity, with the Mother of Chamdhevi, Phra Chao Mahantayot and Phra Chao  Anantayot as the presidents and there were different sizes of about 108 fireworks as Buddhist worshiping.  Later the area of the construction of the Green Eyes Buddha image became a temple called "Wat Phra Chao Ta Khiew (Green Eyes God Temple)". It appeared to be a very prosperous temple during that period and continue to progress as a long period. 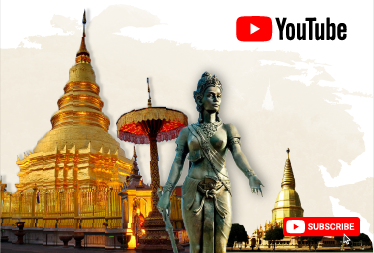